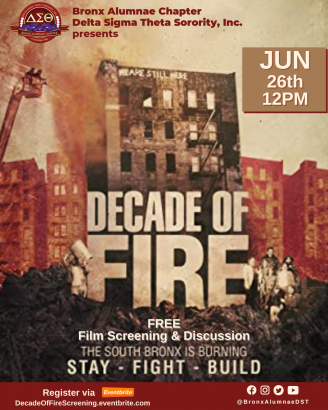 Throughout the 1970’s, fires consumed the South Bronx. Black and Puerto Rican residents were blamed for the devastation even as they battled daily to save their neighborhoods. In DECADE OF FIRE, Bronx-born Vivian Vázquez Irizarry pursues the truth surrounding the fires – uncovering policies of racism and neglect that still shape our cities, and offering hope to communities on the brink today.

Through a rich seam of archival and home movie footage, DECADE OF FIRE confronts the racially-charged stereotypes that dehumanized residents of the South Bronx in the 1970’s, and rationalized their abandonment by city, state and federal governments.