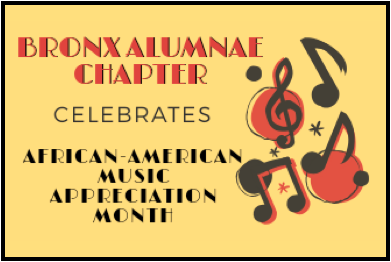 African-American Music Appreciation Month is the annual celebration of African-American music in the United States. It was initiated as Black Music Month by President Jimmy Carter who, on June 7, 1979, decreed that June would be the month of black music.

In 2009, President Barack Obama further defined June as African American Music Appreciation month declaring the start of summer as a celebration of all the black “musicians, composers, singers and songwriters [who] have had enormous contributions to our culture.”  In his 2016 proclamation, President Obama noted that African-American music and musicians have helped the country “to dance, to express our faith through song, to march against injustice, and to defend our country’s enduring promise of freedom and opportunity for all.”

On this 40thAnniversary of Black Music Month, Bronx Alumnae chapter also wanted to show appreciation to all those who ensure the State of Black Music remains robust and continues to grow stronger.

Be sure to visit the National Museum of African American Music scheduled to open in in Downtown Nashville in early 2020.  https://nmaam.org